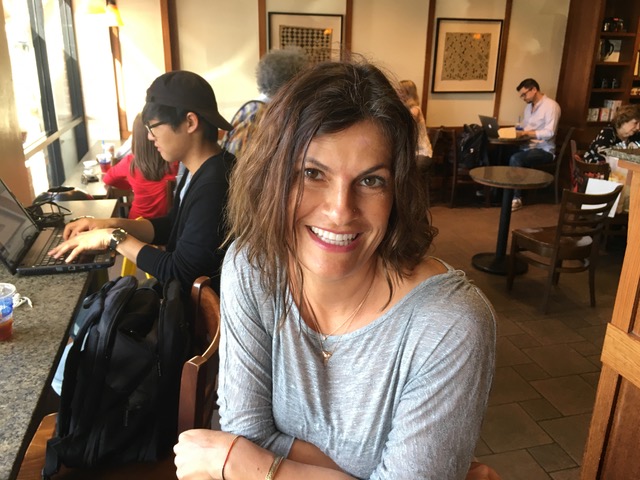 Elena Zaretsky attributes the edge in her writing to her Russian immigrant background, and her blind New Age optimism to her sunny SoCal upbringing: kinda like Dostoyevsky on Molly. Her earliest memories include learning English from reruns of classic TV shows such as ‘Bewitched’ and ‘Mash’.

Elena received her undergraduate degree from the UC San Diego where she double majored in Political Science and Communications and minored in Theatre. Her early acting career took her to the Big Apple where she cemented her knowledge of story and character by completing the two-year program at the William Esper Studio and performing off-off Broadway.

Back in LA, Elena performed improvisation on the main stage at The Hothouse for five years, and appeared on Criminal Minds and Unscripted. Her original sketch character, Natalia Pushkin Pushkin and webisode Law and Order: Puppet Victim’s Unit were both hits online. Additionally, In 2013 Elena appeared in the original MocaTV web series Ambiance Man alongside Fred Armisen.

Since 2008, Elena has been studying screenwriting with Pilar Alessandra at On The Page. As a fledgling writer, Elena’s features and TV scripts were recognized in various screenwriting contests.

Elena has been a two-time finalists for the Warner Bros Writing Workshop with her specs for Fringe and Sleepy Hollow. She was also a finalist for the ABC/Disney Writing Program with partner Nicholas Johnson in 2013. Her genre of choice is dramedy with elements of fantasy and supernatural, and to date she has completed 8 original pilots, 2 feature films and 7 TV spec scripts on her own. She has also written a handful of additional projects with partner Nicholas Johnson.

Since 2015, Elena has been working as a screenwriter-for-hire; tasked with writing and/or punching up scripts for independent producers and international production companies. Also in 2015, Elena earned a Masters in Spiritual Psychology; a degree which compliments her work to this day.

In 2017, Elena penned a holiday film for the Hallmark Movies and Mysteries Channel-- Rocky Mountain Christmas – and it has been the highest rated film to air on that channel to date. She is also developing additional projects with Hyde Park Entertainment and Mar Vista Entertainment, both set to air on the Hallmark Channel in 2022.

And most recently, she was both a FINALIST and SEMI-FINALIST at the Austin Film Festival for her comedy feature, The Red Dahlia and her comedy pilot I’m Your Bio Mom.